The Madhya Pradesh, a large state in central India, retains landmarks from eras throughout Indian history. Begun in the 10th century, it’s Hindu and Jain temples at Khajuraho are renowned for their carvings of erotic scenes, most prominently Kandariya Mahadeva, a temple with more than 800 sculptures. The eastern Bandhavgarh and Kanha national parks, noted Bengal tiger sanctuaries, offer guided safaris. On the 1st of November 1956, the States Reorganization Act was enacted. The new state of Madhya Pradesh was constituted under S.9 thereof. Subsection (1) of Section 49 of the States Re-organization Act ordained that from the appointed day i.e., 1st of November 1956, the High Court exercising jurisdiction, in relation to the existing state of Madhya Pradesh, i.e. Nagpur High Court, shall be deemed to be the High Court for the present state of Madhya Pradesh. 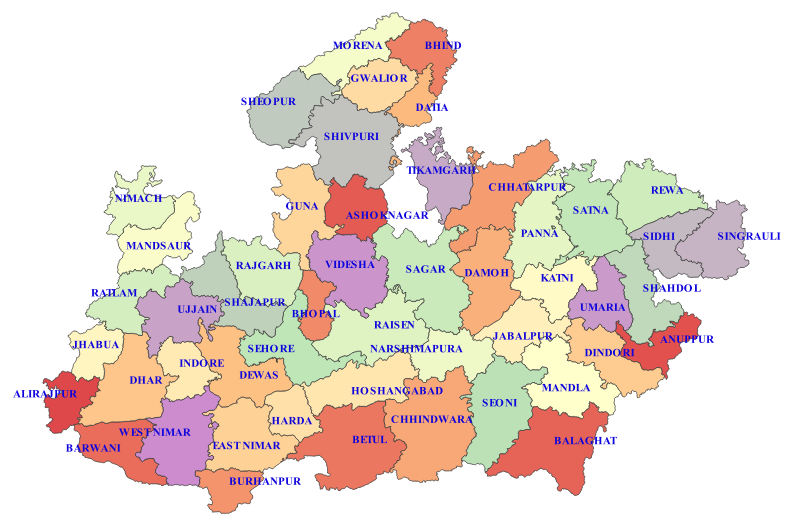 Independence of India in 1947 was followed by the merger of hundreds of princely states into the Union with the formation of the Republic of India on 26th January 1950. The boundaries were rationalized with the reorganization of states. In 1950, Madhya Pradesh was created from former British Central Provinces and Berar, princely states of Makarai and Chhattisgarh, and Nagpur as the capital. The new states of Madhya Bharat, Vindhya Pradesh, and Bhopal were formed out of Central India Agency. In 1956, as a result of the reorganization of states, the states of Madhya Bharat, Vindhya Pradesh, and Bhopal were merged into Madhya Pradesh, some districts of erstwhile CP and Berar were transferred to Maharashtra and some minor adjustments were made with Rajasthan, Gujarat and Uttar Pradesh. Then Bhopal became the new capital of the state. Initially, the state had 43 districts. Subsequently, two large districts were bifurcated in the year 1972, Bhopal was carved out from Sehore and Rajnandgaon from Durg; the total number being 45. In the year 1998, 16 more districts were carved out from larger districts and the number of districts became 61. In November 2000, the south-eastern portion of the state was split to form a new State of Chhattisgarh. Thus, the present Madhya Pradesh State came into existence, the 2nd largest state in the country,

We advise to candidates for Madhya Pardesh Recruitment 2021, How to Apply, Selection Process, Age Limits, and other details please read given here official recruitment notification carefully before apply online or Offline.

We wish you all the best for a better future.

Know the current status of your case by Return SMS

Important: Case Number Record (CNR) is a unique Identity Number of each case, which remains constant. All the Advocates, Litigants, and stakeholders are requested to ascertain the CNR of their respective cases from the concerned Courts and to refer the same for all future references.